Seeing Seville on an Electric Bike and Flamencoa

The Flying Dutchmen told us what a blast they had riding around Seville on a Segway. We called every Segway rental company we could find on the Internet and they were all booked. I looked on TripAdvisor to make sure we had not missed any Segway companies and what came up as the number one outdoor activity in Seville was the Electric Bicycle not the Segway. I called Elecmove Electric Bikes (If you are wondering, I use TripAdvisor a lot when we travel.) and they were able to fit us in. We even got the #1 rated English speaking guide, Marie! We had a blast. It was a great way to see the city and we learned a lot about the history of Seville. One of the things I really liked was that it didn’t make any difference that our fitness levels varied. There are 3 settings on the bike and you can choose how hard you want to work with the setting. The other perk of seeing Seville by bike is that there are bike paths throughout the city. The electric bikes have access to these. http://www.elecmove.com/en/

We walked through the lovely, old, cobbled streets of the historic district. It is much easier to walk or ride a bike through these streets than to drive a car through them. Jim did a wonderful job of driving through them for 3 weeks. You really have to pay attention. 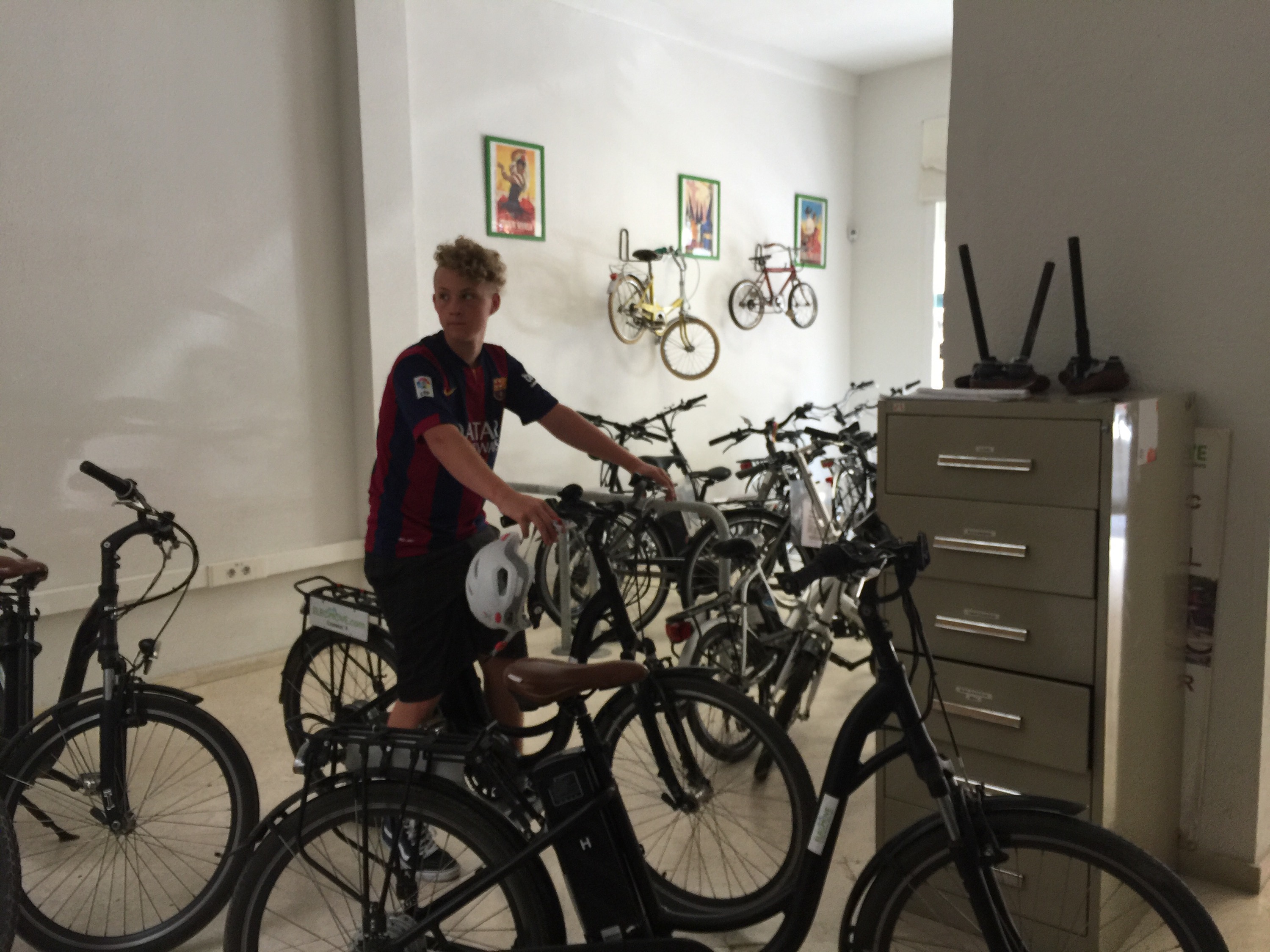 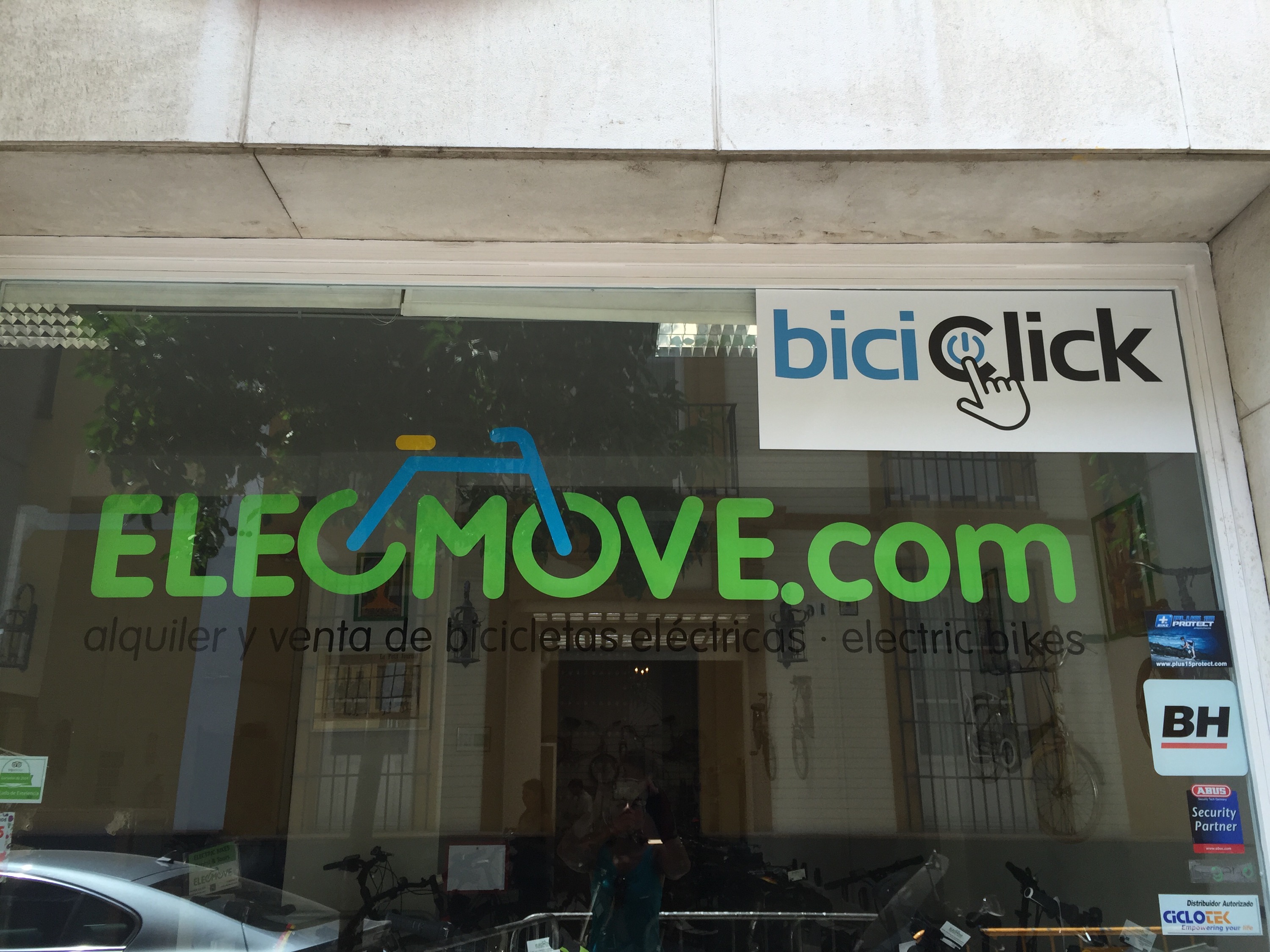 This is Marie our guide talking to Jim. We learned so much from her! 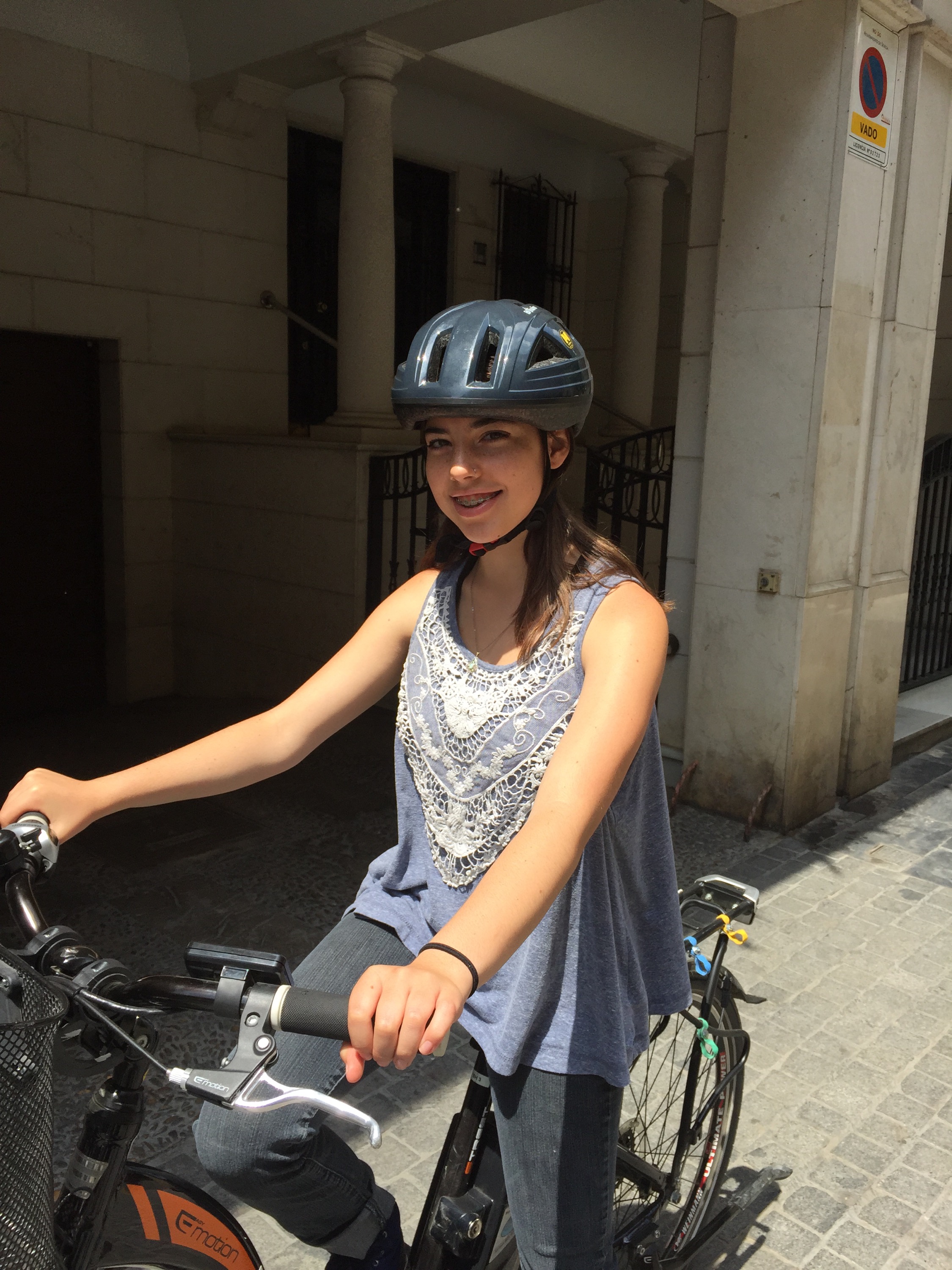 The bikes are easier than I thought they would be. There are three speeds. You choose the one you want (or none at all) depending on how hard you want to work. There is a sensor that kicks in and helps when you start to peddle. 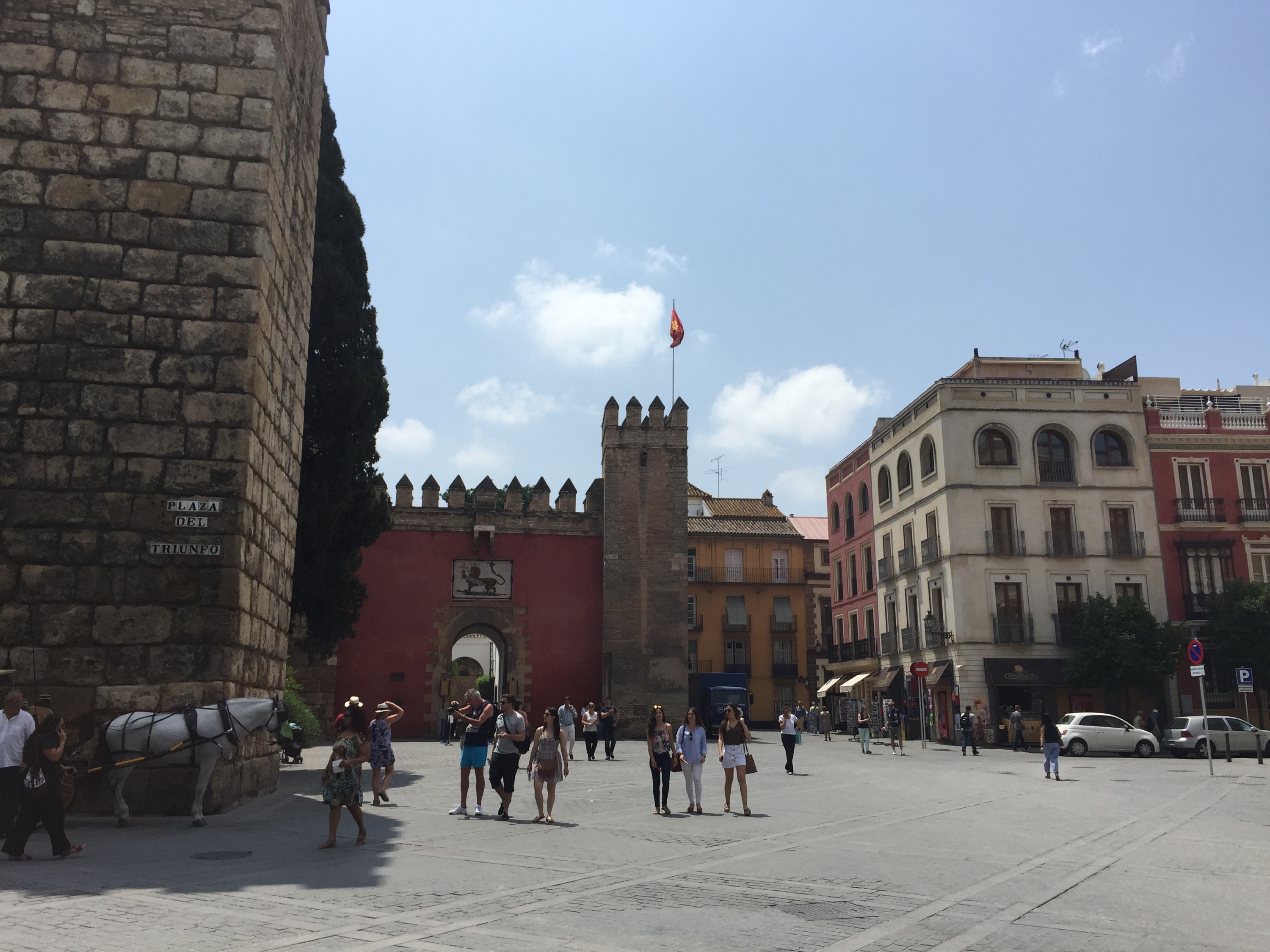 To put it mildly, I am not very into riding bikes. Do not ask me why, I just am not. I was definitely the weakest rider of the bunch. Even I had a great time.  The photo above is of the Caliph’s Castle. It is over 1000 years old. Fernando the Catholic King took Seville from the Caliph in 1248. Earthquake 1356 damaged the Caliph’s Castle and the cathedral below.

Because of the Earthquake the Cathedral needed to be repaired. When it was finished in 1403 it was the world’s largest cathedral. The Pope didn’t like this so he added onto the cathedral in Rome. Then the British built St James’ Cathedral. So the Pope added on to the cathedral in Rome yet again, so that once again the cathedral in Rome would be the largest. The Pope was tired at this point of living in a dust filled place that was always under construction so he made an edict that you need the Pope’s approval to build or renovate a cathedral. In all the years since then a project to make a larger cathedral than the one in Rome has never been approved. 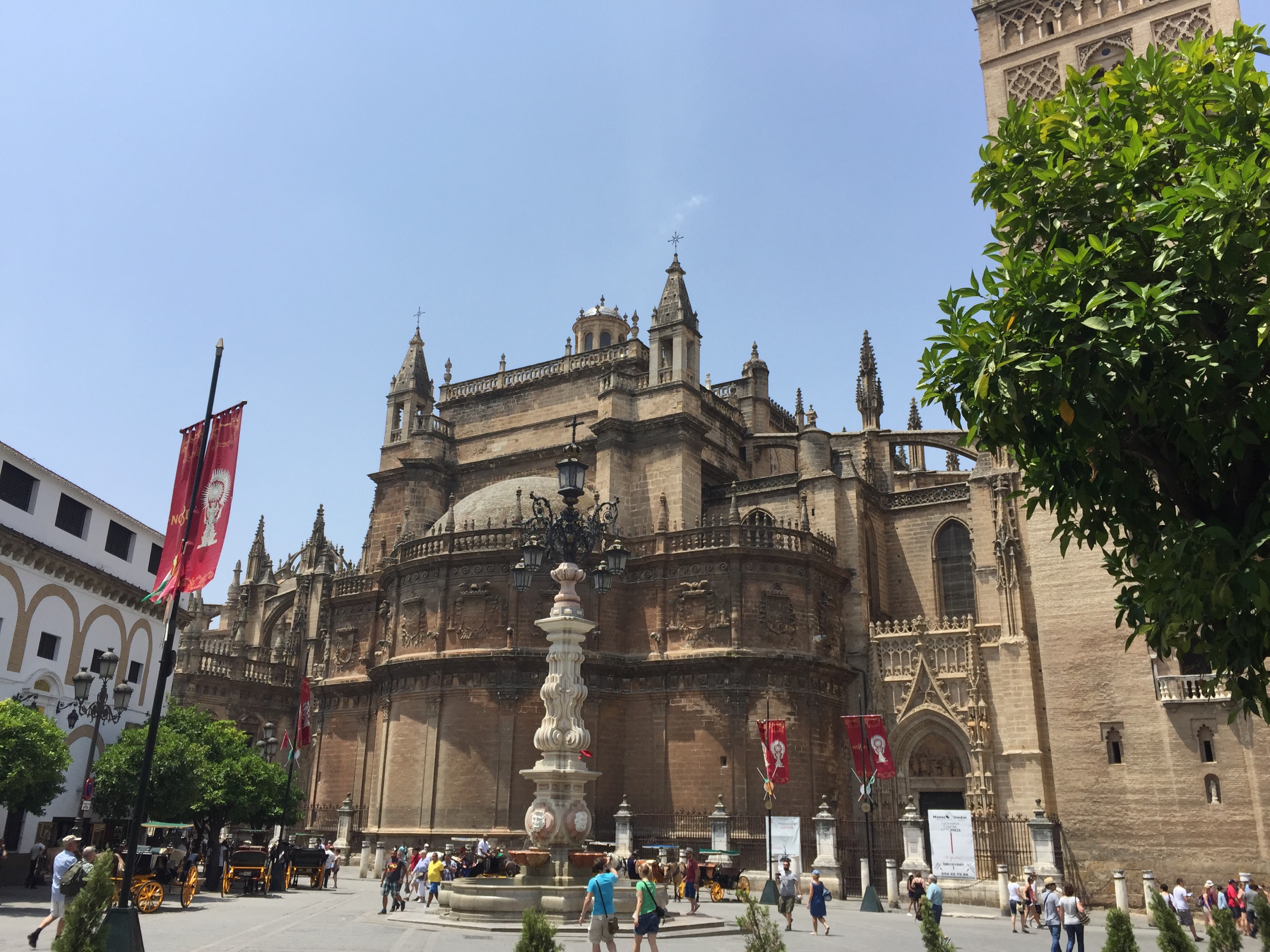 The steel structure at the top of the bell tower below was once tethered in place. The moorings came loose and then it became a weather vane. This was a problem as it would sometimes spin wildly and frighten people that it was going to fall when the surrounding buildings were shorter. Now that it is surrounded by taller buildings it is no longer a problem as this square does not get as much wind.

There were many exports from the new world pouring into Seville. Isabella made Seville the site where all goods from the new world first came to. The tobacco factory processed the tobacco being imported in. A black market started as people began growing tobacco plants in their back yard. The king and queen outlawed this and a factory was built. The queen and king were losing too much tax revenue. Women were chosen to work in the factory because it was thought they were more delicate in handling the leaves. The women began to steal tobacco. One woman in particular, named Carmine, started stealing tobacco. A book and opera were written her.

This is the Plaza de Espana. It is beautiful. The Naboo scene in Star Wars is filmed there,   https://m.youtube.com/watch?v=mVQyW1n5ECY. 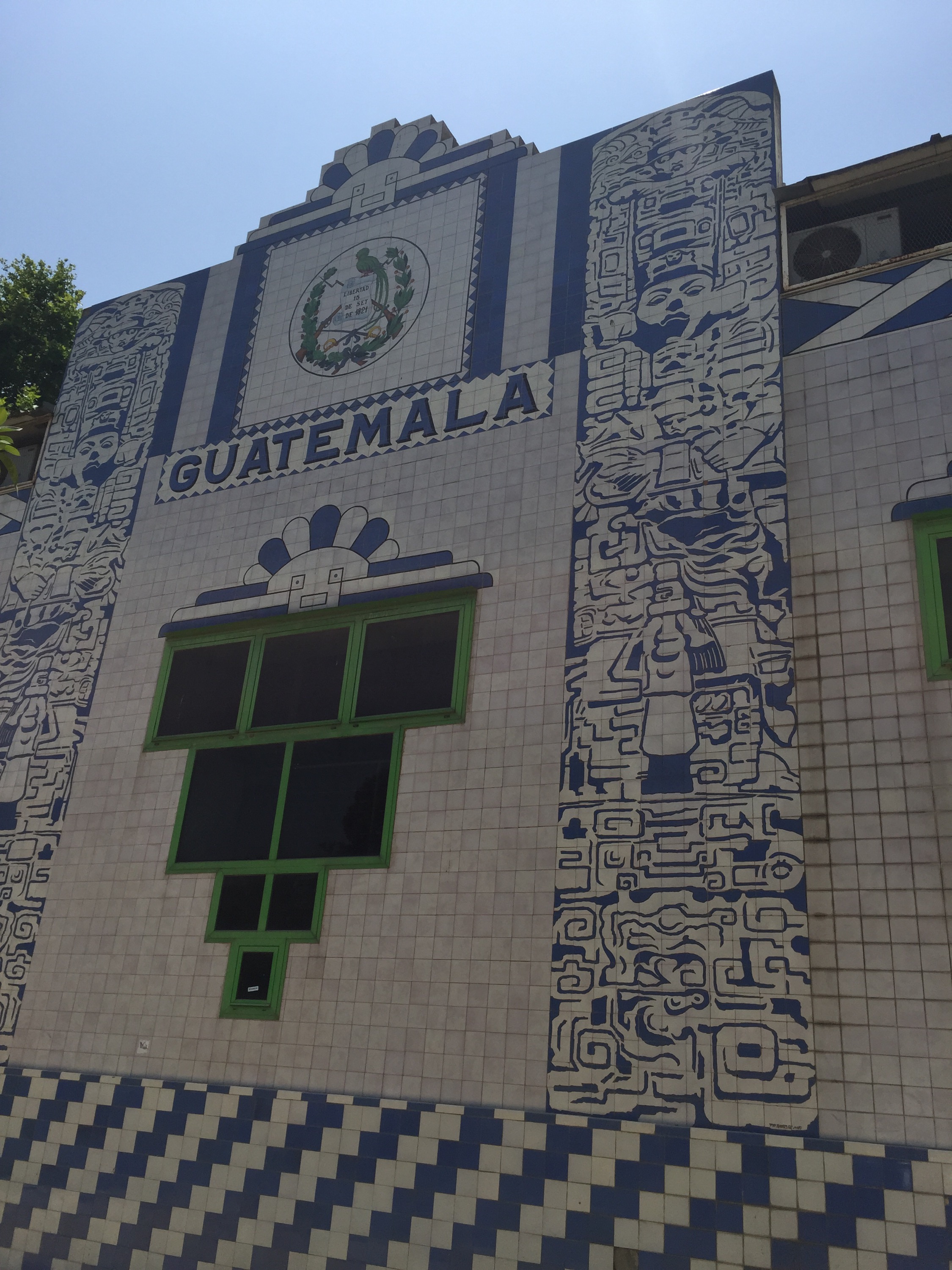 The building above is called the Bathroom of ’29. It was the Guatemalan embassy built for the World Expo. People mistakenly thought it was a bathroom and used it as such. It has been abandoned since then.

This is Maria Luisa’s summer residence. Built by the queen for her sister. 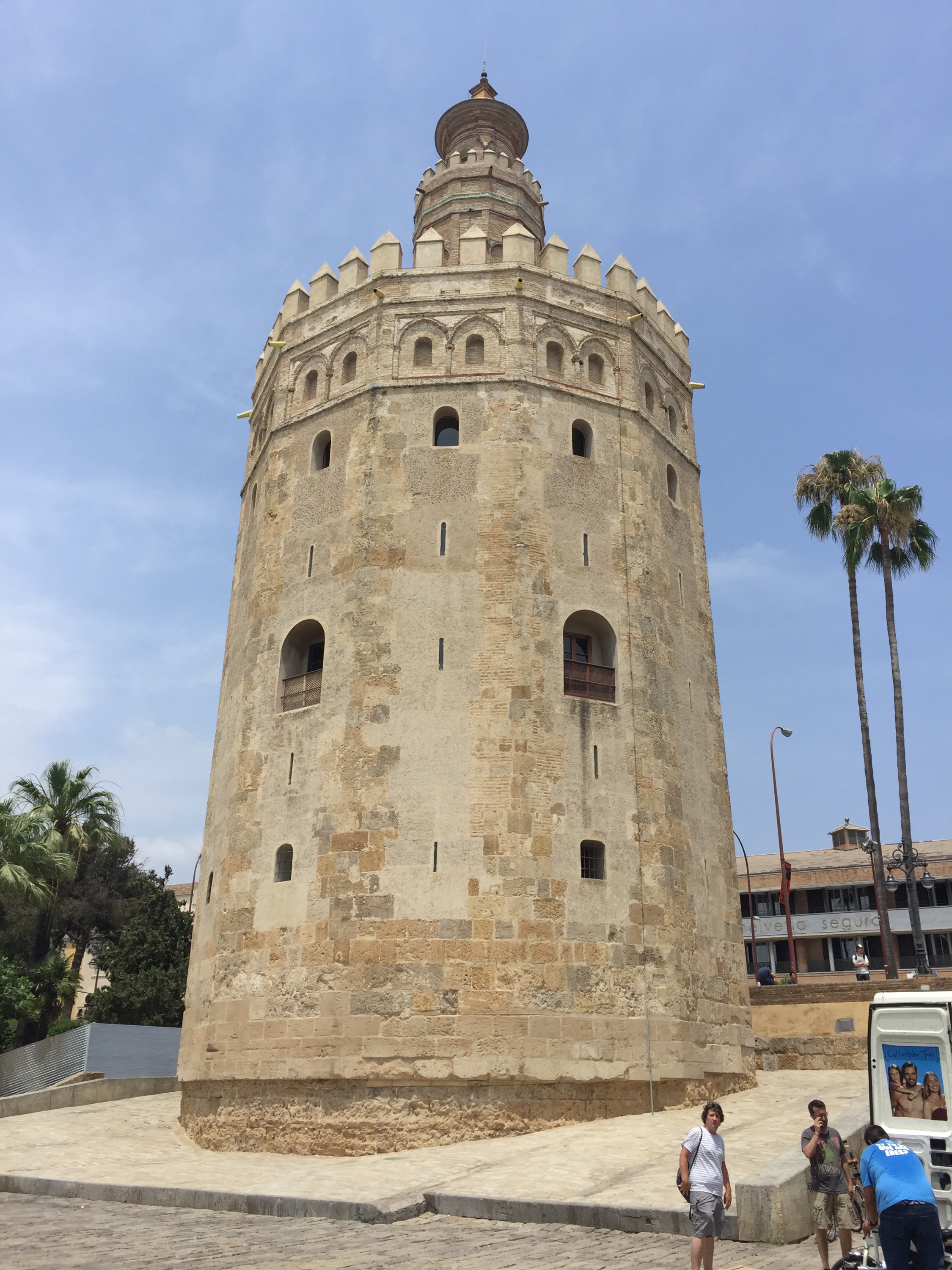 The tower above was built by the Moors as a watch tower. The Catholics used it as the Gold Tower. This is where they would collect gold brought from the new world.

This is the gypsy quarter. The gypsies practiced magic which frightened non-gypsies so they were put in their own quarter. It is thought that it is a combination of Moorish and gypsy culture that resulted in the style of dance called flamenco. The photos below are from the show we saw at the Flamenco Museum. 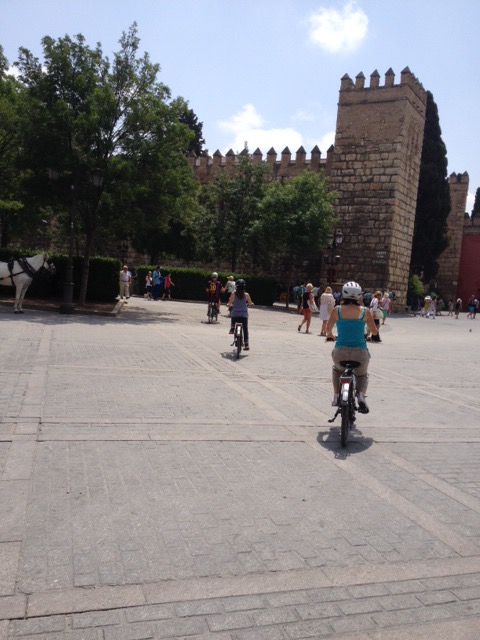 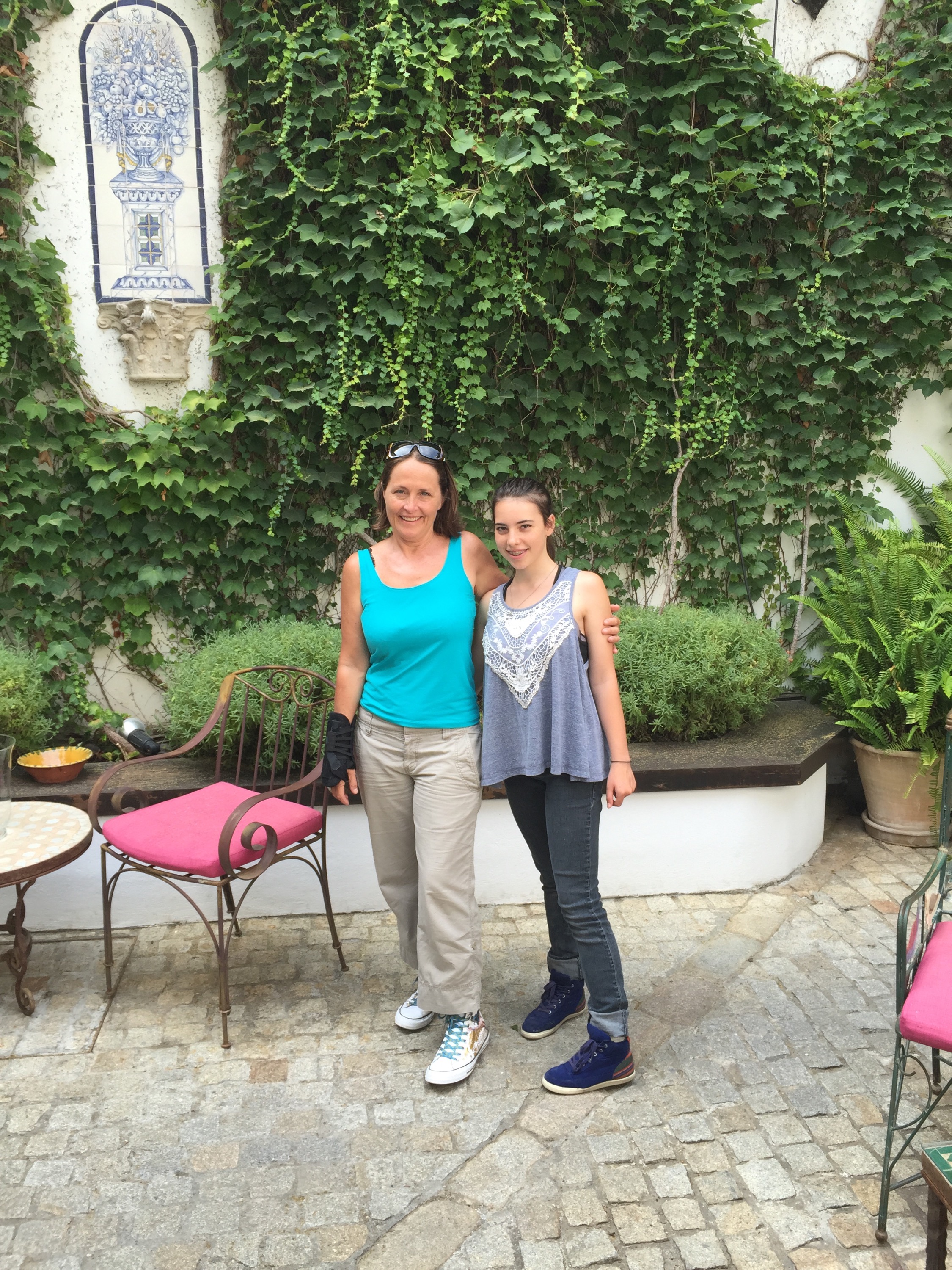 Ready and waiting for flamenco. It was a great show. There was dancing, singing, and guitar playing. http://www.flamencotickets.com/museo-del-baile-flamenco-seville

Look how the paint has been chipped off the floor. 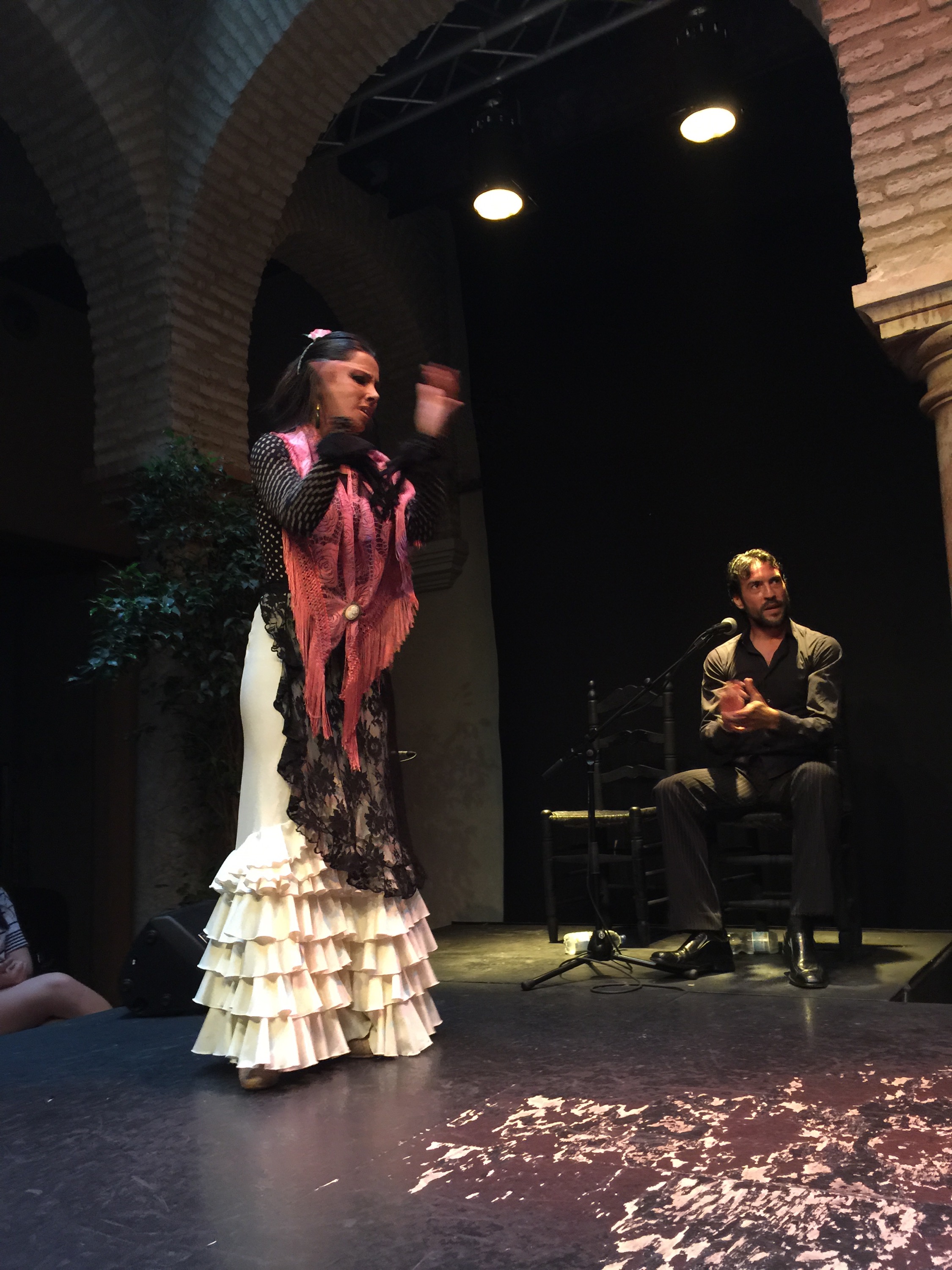 These two danced together.

And each danced a solo. 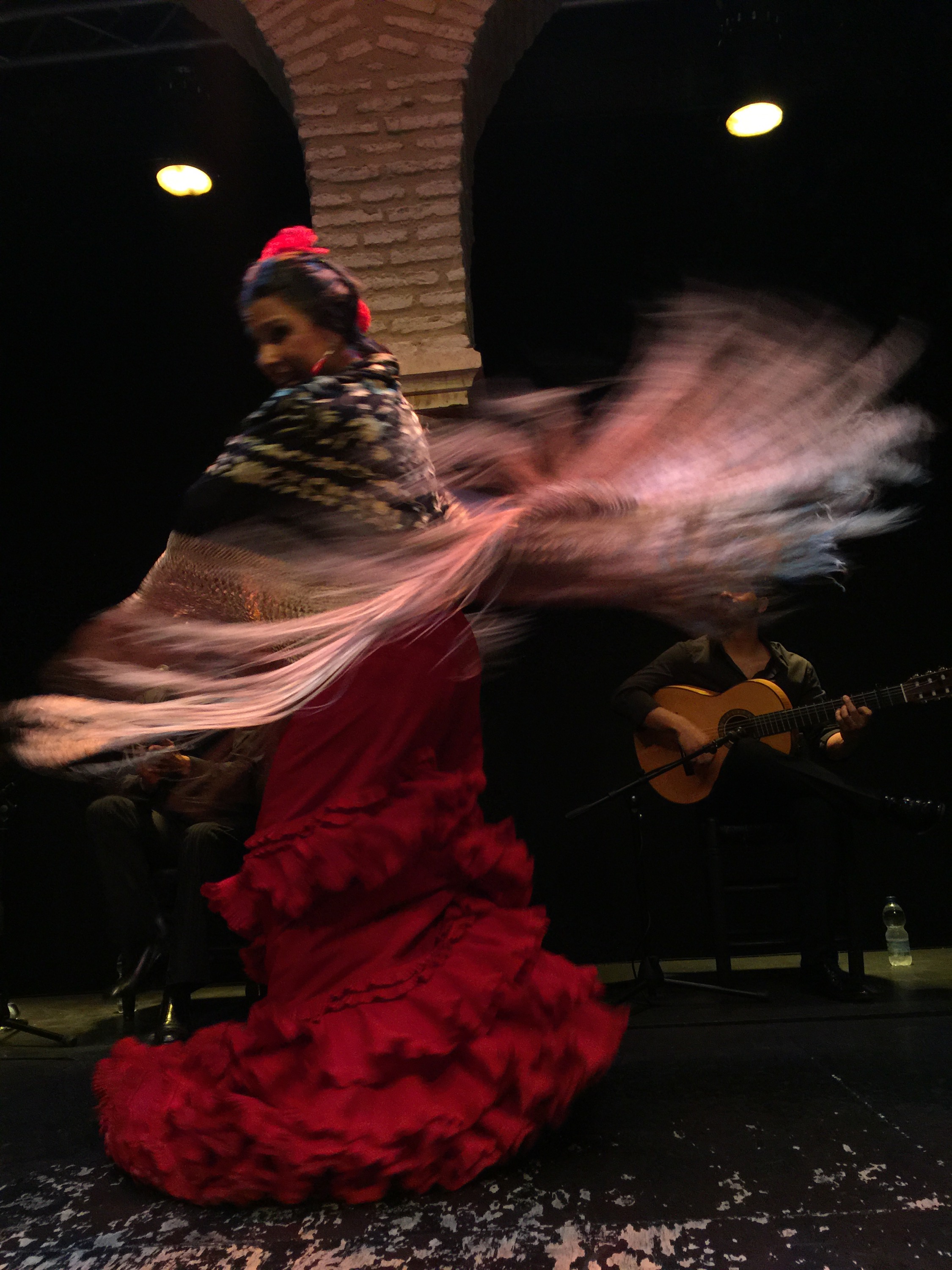 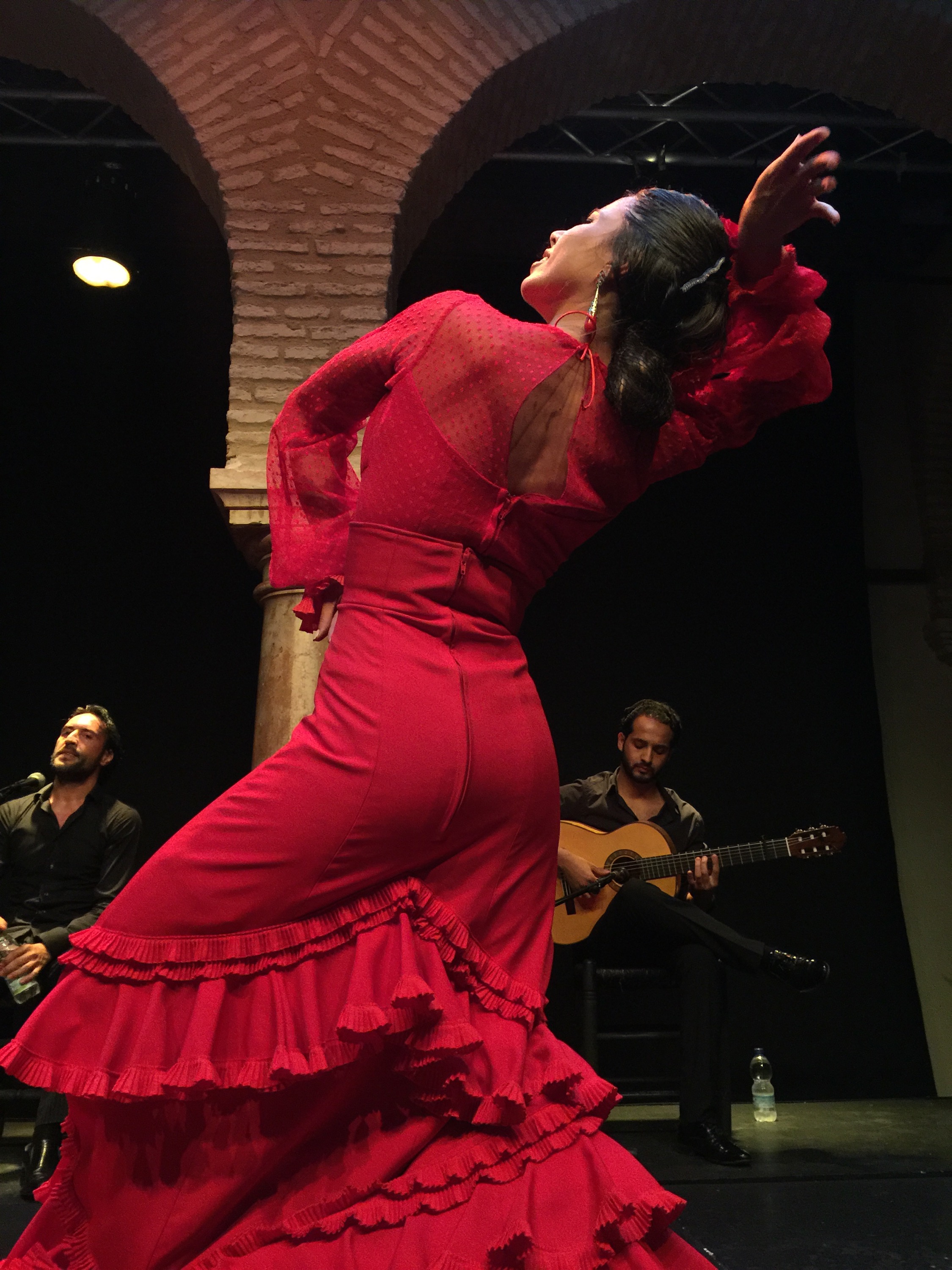 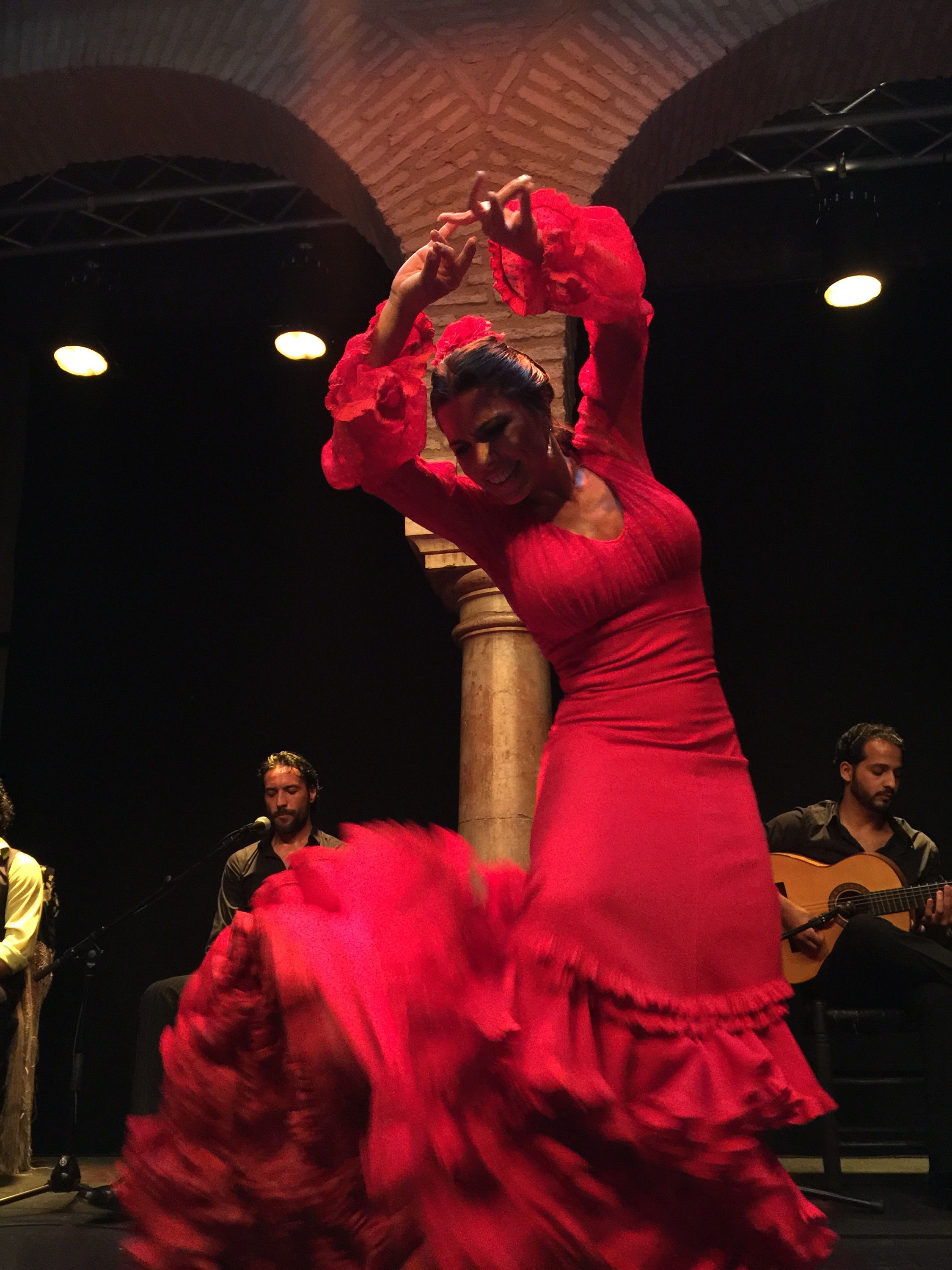 We were in the front row, a matter of going early to get your seats. It was something to watch, and the scarf and skirt brushed over our faces a few times. In between the dancers, there would be a guitar or singing solo. 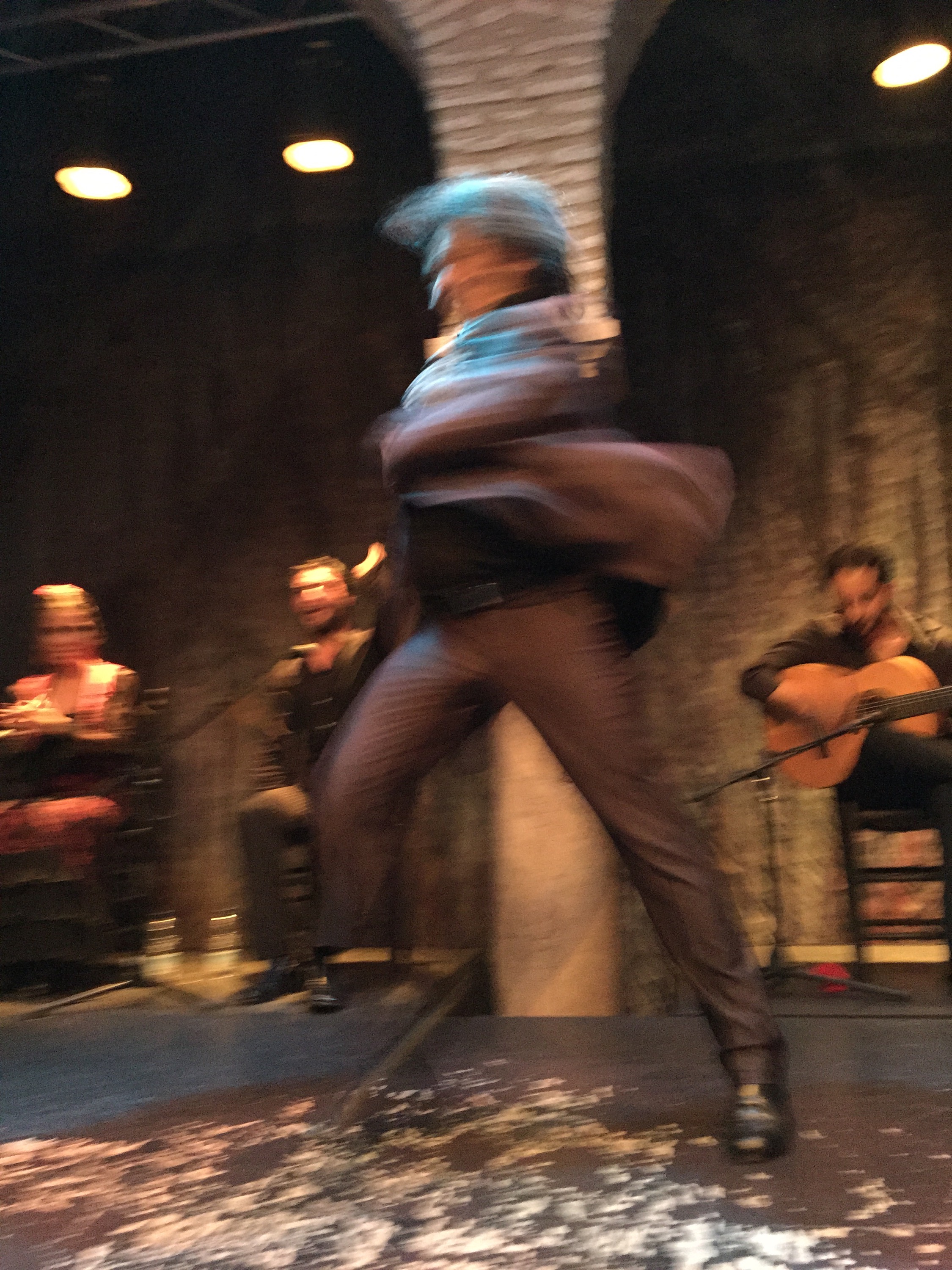 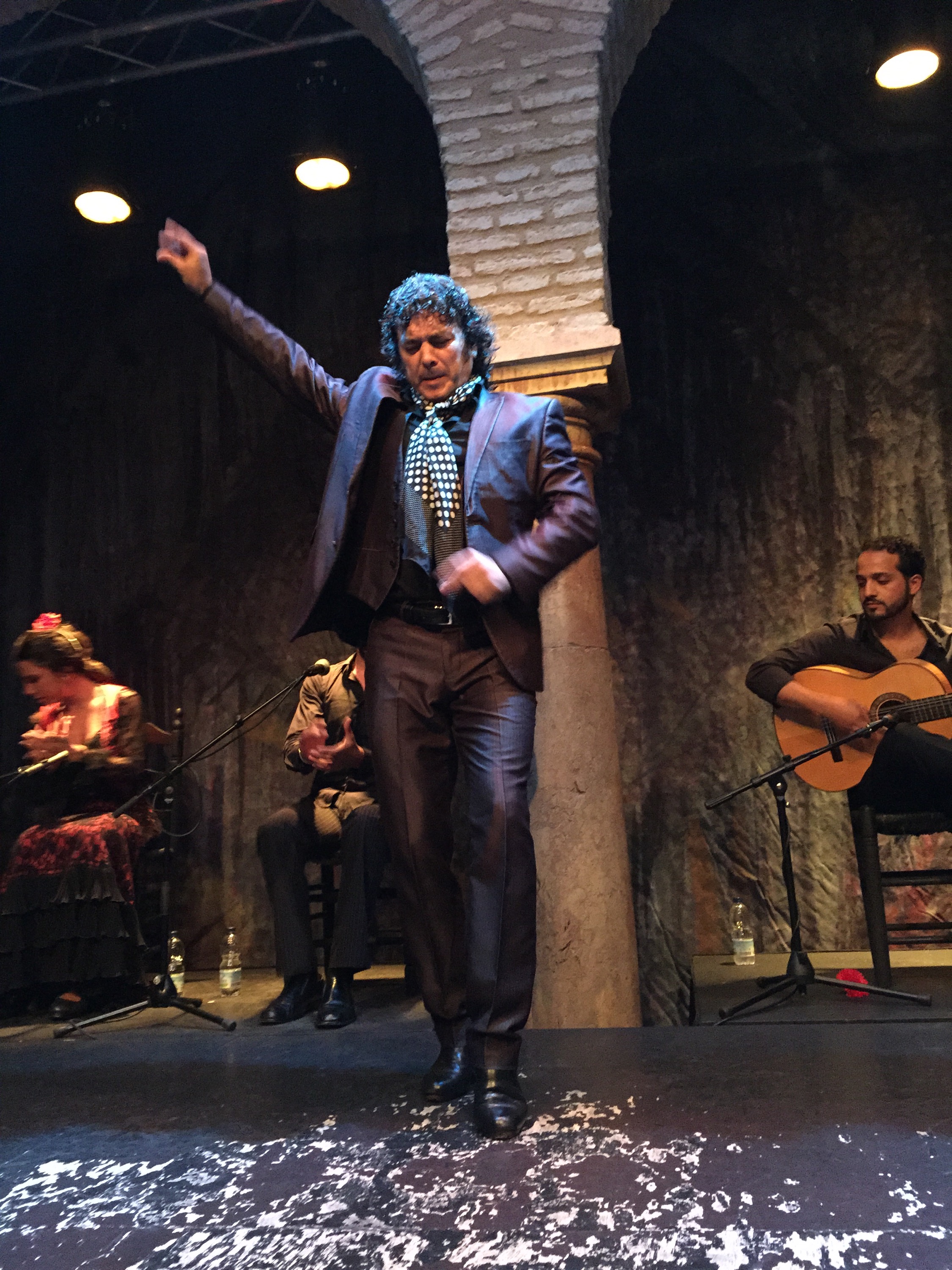 The Chinese wedding fad. At the a plaza de Espana, there was a wedding photo shoot taking place. Marie told us this is the new fad in China. The couple will marry 1 or 2 months before, then they will travel all over having wedding photos taken of themselves. The groom of this duo looked to be very into it. The bride looked over it. The photographers were yawning. What a strange trend.